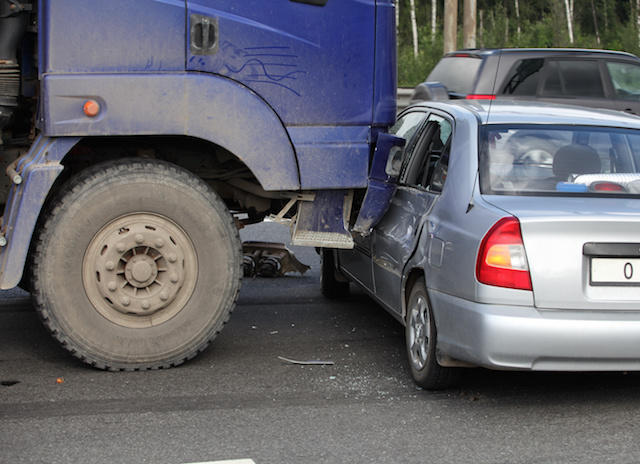 Trucks have to obey the same rules of the road that apply to cars.

But an accident involving a big truck, like a semi or a delivery truck, adds some extra challenges. Besides the driver of the truck, there are other players who might also be at fault, including:

An experienced accident attorney will know how to track down who is responsible and make sure that they pay their fair share of damages from an accident.

If you were in an accident with a truck, click here to talk with an experienced Los Angeles accident attorney

Motorcycles must also obey the rules of the road. But an accident involving a motorcycle may involve some additional factors. One issue is “lane splitting” — when a motorcycle rides the line between lanes. Lane splitting is legal in California, but, depending on the situation, a court may say that lane splitting was reckless in a particular case. Then the court might say to the motorcycle rider, even though it was legal to split the lanes, the accident is still your fault because you were not careful.

On the other hand, it might matter a lot when it comes to figuring out the amount of damages. Say Mary the Motorcycle Rider is not wearing a helmet and she suffers a head injury from an accident with Doug the Driver. Even if the accident was Doug’s fault, Doug’s attorney will argue that Mary’s head injury happened because she was not wearing a helmet. So, even though the accident was Doug’s fault, his attorney will argue that Doug should not have to pay Mary’s medical bills for the head injury. In a situation like this, an experienced accident attorney can help make sure that the right evidence is presented in court so the court can reach a fair result.

If you were in motorcycle accident, click here to talk with an experienced Los Angeles accident attorney

The general rule is that the law treats bicycles just like cars, not like pedestrians. Unless a bicycle rider is off their bike, the rider is NOT considered a pedestrian and does not always have the right of way.

So, if Bob the Bicyclist gets in an accident with Dana the Driver, the law will treat Bob the same as if her were driving a car. If, for example, Bob’s follows too closely and rear-ends Dana’s car, then generally Bob will be considered at fault, even if Bob gets injured in the crash. To take an even more extreme example, if Bob ran a red light, then Bob would almost always be at fault.

Other situations where a bike rider would be considered at fault would include, if the bike rider

Who is at fault if the driver did not see the bicycle? For example, say Bob’s bicycle is stopped at an intersection to the right of Dana’s car. Then when the light turns green, Dana turns right and hits Bob. Or, if Dana opens her car door into traffic and hits Bob as he is riding past. In both of these cases, the court will probably say the accident was Dana’s fault. It is Dana’s fault because the law says that a driver has to be careful to watch out for bicycles, especially when turning or when opening a car door into traffic.

If you were in an accident with a bike, click here to talk with an experienced Los Angeles accident attorney

If a pedestrian gets hit while walking in a crosswalk, the pedestrian will almost certainly win in court.  But if the pedestrian did not use common sense, then it might be harder to say. An experienced accident attorney will be able to gather the facts and sort out the parties at fault, to help ensure a fair result.

Also, a pedestrian who was injured might have a case against the city or county. If, for example, the city did not properly maintain and repair traffic lights or stop signs. An experienced accident attorney will know how to track down who in the city is responsible and make sure that the city pays its fair share.
If you were in an accident between a car and a pedestrian, click here to talk with an experienced Los Angeles accident attorney